Tides Track Returns For The First Time in Two Years 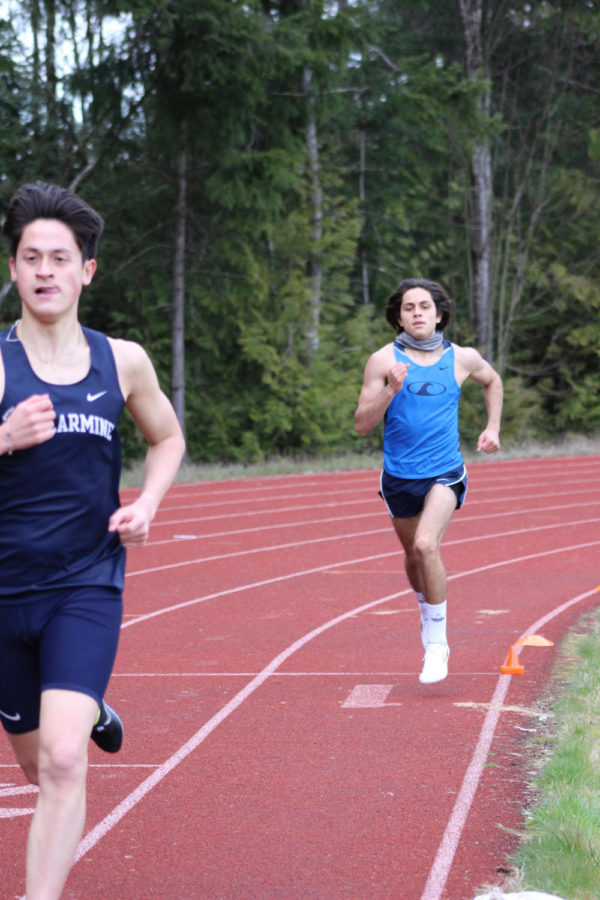 The Gig Harbor track team was finally able to compete once again, and in their first official meet, they did not disappoint. They defeated Bellarmine on their home track, 91-50 on the boys’ side and 80-62 on the girls’ side. It was a great way to kick off the season and stay on par with earlier seasons. Gig Harbor’s team has a long and storied history of state titles and they hope to march forward and get another one in the future.

Short Distance events: For the boys, this meet was very odd. They ran the 100 very well, finishing with the top three runners, but in the 200 Bellarmine dominated. The top performers were senior sprinter Ethan Williams in the 100 (1st with a time of 11.61), and freshman Ayden Fink in the 200 (5th, 26.00). The 400 field was very small, and Gig Harbor’s only runner Weston Mapes finished 3rd. In the girls’ sprints, they dominated. They had the top 7 finishers in the 100, led by Tia Berry with a time of 13.45. In the 200, Bellarmine freshman Odessa Barattieri won, but was followed closely by Sophia Olson and Maura Lenzi. Lenzi commented on the events, saying “Everyone did really well especially for the first relays of the season, we’re all super excited to improve our times and be competitive throughout the season.”

Long Distance events: These races were some of the most exciting of the meet. Freshman Christian Keck said, “Everybody popped off, there’s room for improvement but overall a good meet.” Starting with the 3200, Gig Harbor’s Belle Johnson ran a time of 12:03.53, beating the field by nearly a minute. On the boys side Bellarmine dominated, with the top three finishers. In the 1600 and 800, sophomore Micah Galeana won both. In the mile, he had a time of 4:39.40 and Will Newberg finished 2nd with a time of 4:43.67. The boys 800 was quite easily the best race of the meet. One of the top runners in the state, Matthew Hillyer found himself leading 20-plus meters with less than half a lap to go. Micah Galeana then out-sprinted him in the final stretch to win. Galeana got a time of 2:03.14, and Hillyer had a time of 2:03.23. These times were good for the 3rd and 4th best times in the state so far this year. In the girls’ races, there was a very tight 800 race, with Bellarmine’s Josephine Stevenson edging out Gig Harbor’s Danica Olson. In the 1600, Gig Harbor easily won, led by Kaley Fergus and Reese Morkert.

Field events: The shot put and discus were won easily by Gig Harbor, for the boys and girls. Tia Berry won the shot put with a 31’9″ throw, winning by almost 6 feet. The best performer on the boys’ side was Simon Atwill with a 124 foot discus throw. For the jumpers, Bellarmine was a bit more competitive. They won both the girls high jump and long jump, and got 4 of the top 5 in the boys long jump, which the Tides’ Josh Felt won.